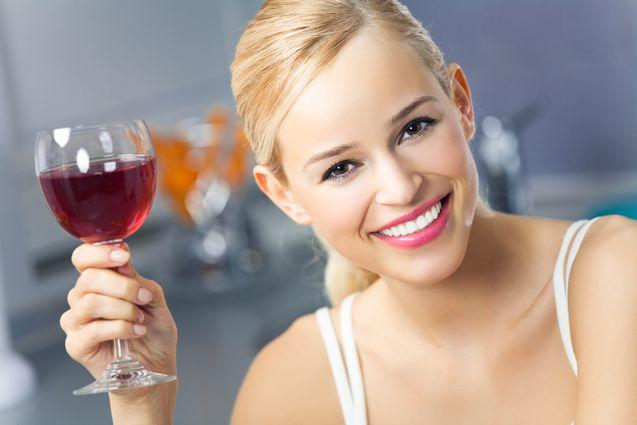 23
FEBRUARY, 2018
Researchers suggest that red wine could protect against the bacteria that cause tooth cavities and gum disease.
Prior research has found that drinking a glass of red wine a day may protect against cardiovascular diseases, diabetes, and neurodegenerative disorders. The latest laboratory studies by researchers in Spain now suggest that the polyphenols in red wine could also protect against the bacteria that cause tooth cavities and gum disease. The research, headed by M. Victoria Moreno-Arribas at the Instituto de Investigación en Ciencias de la Alimentación (CIAL), in Madrid, is reported today in the Journal of Agriculture and Food Chemistry, in a paper entitled “Inhibition of Oral Pathogens Adhesion to Human Gingival Fibroblasts by Wine Polyphenols Alone and in Combination with an Oral Probiotic.”
Polyphenols are found in many plants and fruits, and their antioxidant properties have been well studied. Red wine is a rich source of dietary polyphenols, with multiple studies providing evidence that these compounds have health-promoting benefits, and may also impact on gut microbiota. What isn’t yet understood is whether polyphenols, such as those in red wine, can also have a positive impact on oral health and oral microbiota.

“Our results confirmed for the first time the relevance of bacterial and cellular phenolic metabolism as well as a complementary metabolic action…”
The CIAL team used cells that model gum tissue to test the effects of two red wine polyphenols, caffeic- and p-coumaric acids, as well as two commercially available red wine and grape seed extracts, on bacteria that stick to teeth and cause dental caries and gum disease. They also looked at the effects of combining the red wine polyphenols with Streptococcus dentisani, an oral microbiome species that is thought to act as an oral probiotic. Their test results indicated that the polyphenols inhibited S. mutansadhesion to the human fibroblasts by up to 40%. The two wine polyphenols were also more effective than the wine extracts at inhibiting bacterial adherence to cells.

The ability to block bacterial adhesion was even more pronounced when the polyphenols were combined with the oral probiotic. “Results confirmed a complementary action of both caffeic acid and p-coumaric acid, and S. dentisani in the competence process against S. mutans adhesion,” the authors write.

Digestion of polyphenols starts in the mouth, and the team’s results indicated that polyphenol metabolites may play a role in some of the effects against the pathogens. “Our results confirmed for the first time the relevance of bacterial and cellular phenolic metabolism as well as a complementary metabolic action,” they note. “This metabolism included the degradation of precursors into phenolic metabolites as well as other enzymatic reactions.”

The authors suggest that the reported in vitro study represents a useful starting point for investigating the mechanisms of action of red wine polyphenols against oral disease. “Further steps should be addressed toward the use of mixed biofilms models which can mimic bacteria–bacteria interactions as well as some other conditioning factors that should be added to multifactorial assays,” they write. “Once molecular mechanisms of action become elucidated, in vivo studies of periodontal and cariogenic diseases are recommended, in order to evaluate the potential of polyphenols as preventive therapies in the management of cariogenic and periodontal diseases.”